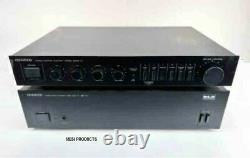 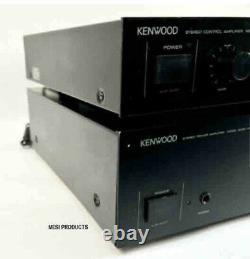 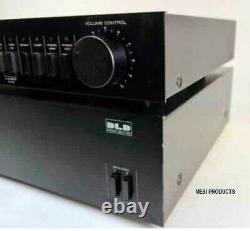 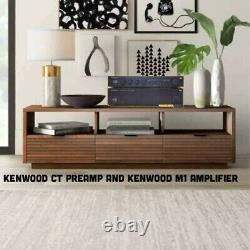 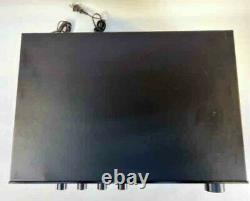 The M-1 power amplifier, the same width, almost exactly the same depth, and 4-7/16 inches high, weighs 20 pounds. The units are finished completely inflat black, with controls of the same color. The C-1 has inputs fortwo high-level sources (aux and tuner) and a single phono cartridge withfront-panel switching for either a moving-magnet (MM) or a moving-coil (MC)type. There are input and output facilities for two tape decks, and selectingboth simultaneously connects them for dubbing from deck A to deck B. All signalselection is by means of narrow rectangular pushbuttons (mechanicallyinterlocked) with red LED's above them to show when they are engaged. A smallerbutton turns on the subsonic filter, which rolls off the response at 6 dB peroctave below 18 Hz. The power switch is a large square button at the left ofthe panel. Unlike most loudness controls, this one actsindependently of the volume setting. On the rear of the C-1 are phono jacks forthe various signal inputs and outputs and for the two preamplifier outputjacks. Convenience outlets, one of them unswitched.

The performance specifications of the C-1 are impressive, especially in view of its modest price. They include distortion of less than0.005 per cent at a 1-volt output from any signal source and a frequencyresponse down by 3 dB at 1 Hz and 250 kHz.

The rated output is 1 volt, with amaximum output of 5 volts before clipping sets in. Like the preamplifier, the M-1 is a wideband design. Its response is rated at -3 dB at 1 Hz and 300 kHz, with a slew rate of ± 100 volts per microsecond. The M-1 has nocontrols on its panel other than the square power button (with an adjacent pilotlight) and two narrow pushbuttons for independent (not simultaneous) operationof two sets of speakers. It also has a front-panel headphone jack.

The M-1features the Sigma Drive circuit introduced by Kenwood a couple of years ago. The technique essentially extends the negative-feed-back path of the amplifierto the speaker terminals themselves instead of only to the amplifier outputterminals, as is usually the case. On the rear of the M-1are large insulated binding posts for the speaker outputs (including an extrapair of sigma sensor terminals for each of the speaker-A outputs), the inputphono jacks, and three a. Outlets, one of them switched.

The Sigma Drivecircuit operates only on the speaker-A outputs, and the speaker-B terminals aretwo sets of conventional binding posts. The C-1 preamplifierhad a frequency response flat within 0.5 dB overall from 20 to 20,000 Hz, andthe subsonic filter reduced the 20-Hz output by about 1.5 dB. Its6-dB-per-octave rolloff rate is too slow to be very effective at reducinginfrasonic signals, however.

The tone controls had conventionalcharacteristics, with a moderate control range of about ± 10 dB at thefrequency extremes. The loudness control, as specified, also had a modest effect on the overall response. At its maximumsetting, the maximum boost below 100 Hz was only 8 dB. We noted that theturnover frequency of the loudness compensator was approximately the same asthat of the bass tone control, making the two somewhat redundant (except in theunlikely case of using both simultaneously). The loudness compensation did notaffect the high-frequency response of the amplifier.

The RIAA phonoequalization was perfectly flat from 100 to 20,000 Hz, rising only 1.5 dB at 20Hz. The phono (MM) input termination was 47,000 ohms in parallel with 30picofarads, an unusually low value that makes the C-1 compatible with virtuallyany combination of cartridge and tone-arm wiring. The phono preamplifieroverloaded at a relatively high input level of 200 to 217 millivolts (mV), depending on the frequency, over the entire audio range. The input sensitivityfor a reference output of 0.5 volts was 84 mV for the high-level inputs and 1.4mV for the phono (MM) input. The sensitivity of the phono (MC) input wasapproximately 20 dB higher, or 0.12 mV. The A-weighted noise level, for anyinput, was below our 100-microvolt measurement "floor" (-76 dBreferred to 0.5 volt). The isolation between inputs of the C-1 was total, withno cross-coupling detectable, even at 20,000 Hz, down to -140 dB. The distortion of theKenwood C-1, at most frequencies and output levels, was nearly unmeasurable. From 0.0003 per cent at 1 volt output (1,000 Hz), it rose smoothly to 0.0008per cent at 4 volts and 0.0028 per cent at 5.7 volts, just before the outputclipped at 5.75 volts. All measurements were made with a standard IHF load of10.000 ohms in parallel with 1,000 picofarads.

Later, our high-powertests, especially with 4-ohm or lower load impedances, caused the top of theamplifier to become quite hot, although its thermal protection system nevershut it down. In normal use, its top plate became only slightly warm. We made all ourmeasurements on the M-1 at its speaker-B outputs (without Sigma Drive).

With 4-ohm loads, theclipping power was 177 watts (it is specified as 160 watts). Although the M-1is not rated for driving 2-ohm loads, we also tested it in that way and foundthat the 6-ampere power-line fuse blew before we reached clipping (it is aninternal fuse, not intended to be user-replaceable).

Dynamic power measurementsproduced maximum outputs of 178 watts and 284 watts for 8- and 4-ohm loads, respectively (the ratings are 170 and 210 watts). We also found that the M-ldelivered a considerable output (200 watts) into 2 ohms under dynamic-testconditions.

The M-1 was stablewith reactive loads, although we observed a tendency for its protective relayto shut it down momentarily when we drove a 10,000-Hz square wave into a loadwhose impedance fell to about 2 ohms at about 70 kHz. This is highly unlikelyto occur with any reasonable combination of speaker load and input signal. Theinput sensitivity of the M-1 (for a reference output of 1 watt) was 100millivolts. The output noise was less than our measurement floor of 100microvolts, or -90 dB referred to 1 watt. The frequency response of theamplifier was flat from 10 to 20,000 Hz, falling to -0.3 dB at 5 and 50,000 Hz, and to - 4 dB at 500,000 Hz (our upper measurement limit). The slew factorexceeded our measurement limit of 25.

The IHF intermodulation distortion with testsignals of 18 and 19 kHz was -82 dB for second-order (1,000-Hz) components and-69 dB for third-order (17- and 20-kHz) components referred to 105 watts. Our measurements onthe Kenwood Audio Purist Basic components speak for themselves. For allpractical purposes and most impractical ones! The C-1 preamplifier offers all the control flexibility most of uswill ever need, yet it is simple to use and free of any "bugs" thatwe could find. The combination of the C-1 and the M-1 power amplifier wasaudibly completely noise-free at maximum volume on any input except phono (MC);the high gain of this input produced an audible hiss at maximum volume, but theamplifier was totally quiet at any normally usable control setting.

Naturally, theseamplifiers have no sound of their own. We did not attempt to use them withSigma Drive, but we have previously tested Kenwood amplifiers having thatfeature and have found no effects, good or bad, from its use.

The ability ofthe M-1 to drive almost any speaker load under program conditions is a strongplus (the blown fuse during its high-power steady-state operation into 2 ohmsis a sign of the effective protection designed into the amplifier). It is satisfying tofind this caliber of performance at what must be considered very moderateprices in today's market.

At higher prices one can probably find more ordifferent control features or added signal-processing flexibility as well ashigher power (though we doubt that many people will find the power capabilitiesof the M-1 inadequate). This item is in the category "Consumer Electronics\Vintage Electronics\Vintage Audio & Video\Vintage Stereo Receivers".

The seller is "mesiproducts" and is located in this country: US. This item can be shipped to United States.